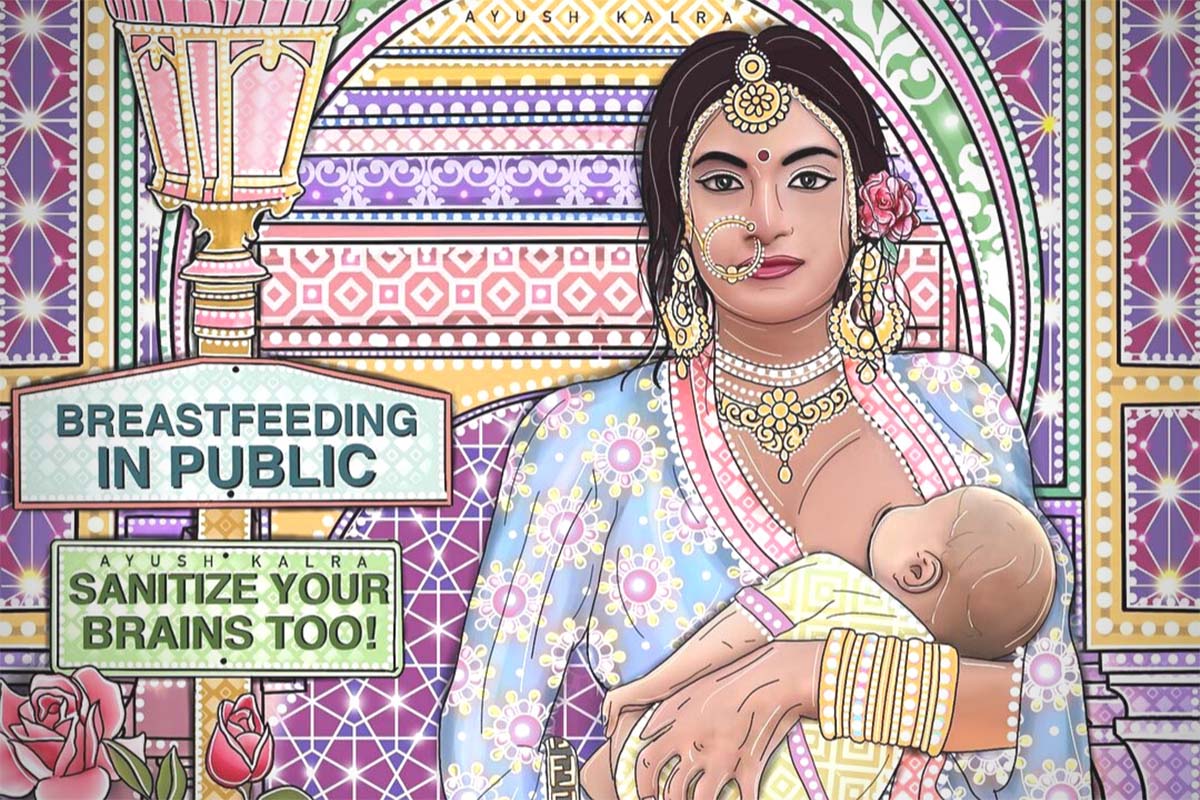 The first thing pharmacist and founder of Instagram account @breastfeedinginfo, Meera Uppal, tells me is that there is no ‘right’ and ‘wrong’ in feeding a child.

Whether it’s formula, mixed bottle-feeding or breastfeeding, a parent’s instinct is always right.

The problem is that South Asian women are rarely given all the information they need when it comes to breastfeeding.

This isn’t just with family and friends, Meera explains. Having worked as a healthcare professional herself, she can give first-hand experience on the lack of knowledge GP’s, nurses and health workers tend to give to mothers on the topic.

And the difference between the two is huge. Whist formula saves lives, can be given to premature babies to help them grow or as an alternative for mothers who cannot breastfeed, the benefits of breastfeeding far outweigh formula.

But they are rarely told to South Asian mothers.

That’s why, Meera decided to set up her own social media page to become an advice, support and guidance forum for mothers who wanted it.

Without demeaning any mothers or parents for their choice of practice, she wanted to open a healthy conversation on breastfeeding.

So, what are the benefits?
Meera explains to me the ‘natural need’ for humans to breastfeed as babies. We were born to feed on our mother’s milk and our bodies expect it.

This means a mother’s milk falls under the category of ‘non-processed foods,’ which contains natural and organic vitamins and helps both the babies and mothers’ immune systems.

Breastmilk is much easier to break down than formula which is categorised as ‘ultra-processed foods and strips down a lot of the good stuff for the baby.

Statistics show breastfed babies are less likely to become ill or hospitalised and the mother is less likely to get ovarian cancer amongst other benefits.

Meera further explains breastmilk is ‘liquid gold.’  It has immune-boosting components that are dynamic in responding to your babies changing immune system.

If the baby is feeling sick, the breastmilk will change to adapt to the babies needs providing extra support to the immune system. ‘Night-time’ breastmilk contains more serotonin to help the baby sleep, and the list of ‘magical’ breastmilk benefits goes on. 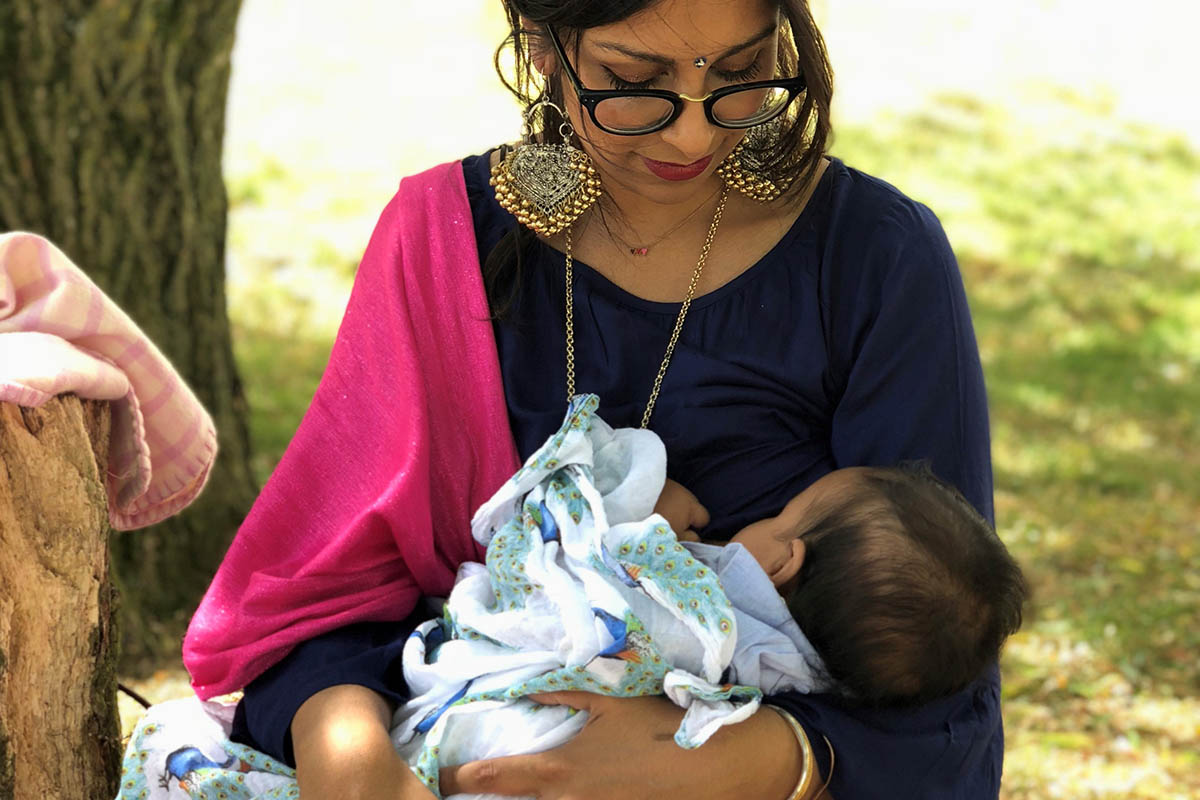 So why are we told formula is better?
When our elder generations migrated into Western societies there was a boom of baby formula. The market industry was capitalising on it, and the convenience of bottle-feeding over breast was easier for parents.

Slowly, the concept of breastfeeding faded, and in turn, breasts were sexualised.

In South Asian societies, breastfeeding in public became taboo and seriously looked down upon, whilst mothers heard ‘I formula-fed you and you turned out perfectly healthy.’

Meera explains to me that babies will naturally put on a lot of chubby weight, and naturally lose it to regardless of being bottle or breastfed.

Over time, a healthy chubby baby became associated with formula and smaller babies as a result of breastfeeding, which just isn’t the case.

On top of the changes to society, the ‘burden’ of South Asian mothers versus ‘house-wives’ barely gave mothers time off.

Meera tells me, all mothers should rest in the first 6 weeks of giving birth, both whilst getting used to breastfeeding and taking the opportunity to heal their bodies.

But recalling a personal account, she stated, “I remember seeing my sister-in-law walking painfully down the stairs a day after giving birth. Even though she tried to hide the excruciating pain she was in, she felt she had to come downstairs and meet the guests. Whilst her baby cried as they passed him around, she played the role of perfect housewife again and again, instead of being treated like a woman who had just had her body torn open.”

Having been raised in a strict South Asian household, the concept made me feel extremely uncomfortable and restless.

Sitting in a busy coffee shop, a young mother with a small baby wrapped in a blanket sat next to me. She confidently breastfed her baby, making sure her baby was comfortably placed, whilst she smiled at me.

My entire uneasiness on breastfeeding vanished at that moment. I began to see with my own eyes, it was not vulgar or ‘dirty’ or bad. The mother made sure her skin was not showing and was doing the best she could for her bundle of joy.

Meera explained to me breastfeeding in public is looked down upon because it isn’t something we normally see. But by mothers breastfeeding confidently and happily, it can become a norm.

She explained to me, as a mother of three daughters, she was extremely reluctant and embarrassed about breastfeeding in public. But she found a way to do it without showing skin and built her confidence.

Influencer @withloveleena uses a breastfeeding cover, which can be found on Amazon to cover herself when feeding her newborn.

Meera tells me fathers can also have a big part in supporting the mother with breastfeeding. Being aware, researching and finding out information before the birth can help the mother deal with nipple pain or issues that arise. This way, the mother can be assured she’s doing the right thing and receive the support she needs instead of being told, ‘This is hard, let’s just switch to bottle.’

As a society, we have a long way to go towards accepting and encouraging breastfeeding mothers as well as providing support to parents using formula.

The best advice Meera gives mothers is to breastfeed for the first two or three days of the babies birth.

This allows the foremilk called colostrum to transfer into the baby’s body and prepares the gut for milk proteins to pass through.

This gooey liquid helps prevent allergies and eczema and is extremely beneficial.

In some South Asian cultures, the colostrum is seen as ‘dirty’ and the baby is given honey or sweet instead which doesn’t compare to the benefits of foremilk.

Meera finishes our conversation with a message to all mothers. She tells me, once again that all mothers are right when it comes to their babies. Her view on breastfeeding is never meant to ‘shame’ or point fingers at mothers using formula, but to encourage and support those who want to breastfeed but are unsure of how to start or fearful of South Asian taboos.