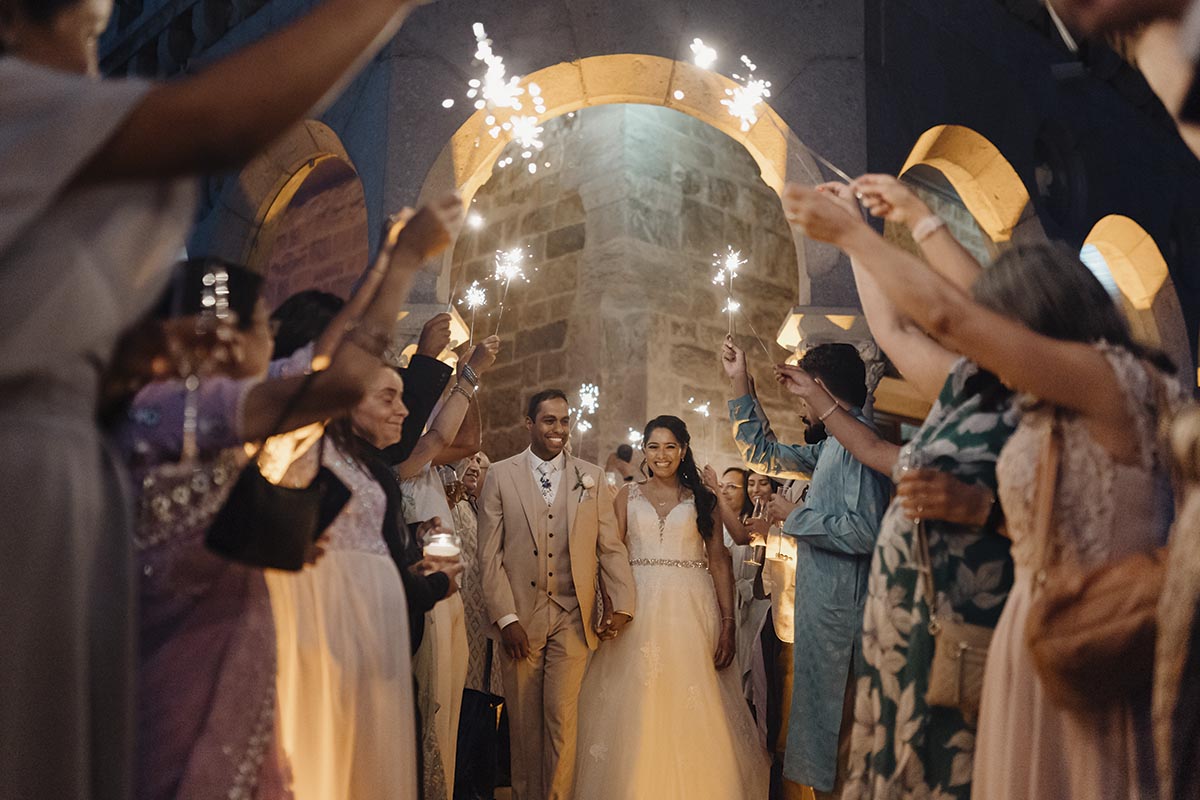 How Karishma and Ravi found perfection in Portugal

When Ravi whisked Karishma away for a weekend in the Lake District and popped the question during a romantic sunset stroll by Derwent Water, the couple knew that they wanted to celebrate their union with an outdoor wedding: “The idea of getting married amongst nature with a backdrop of birds, sun, the elements of fire, earth, water and air really appealed to us. Given how unreliable the British weather can be, we opted to have our wedding somewhere with guaranteed sunshine. We viewed the venues during a trip to Portugal in November 2021 and it was love at first sight!”

Cue August 2022: the couple invited 80 guests to join them for a three-day wedding extravaganza held in two beautiful Portuguese locations that ticked their alfresco box, with added luxury, elegance and magic. 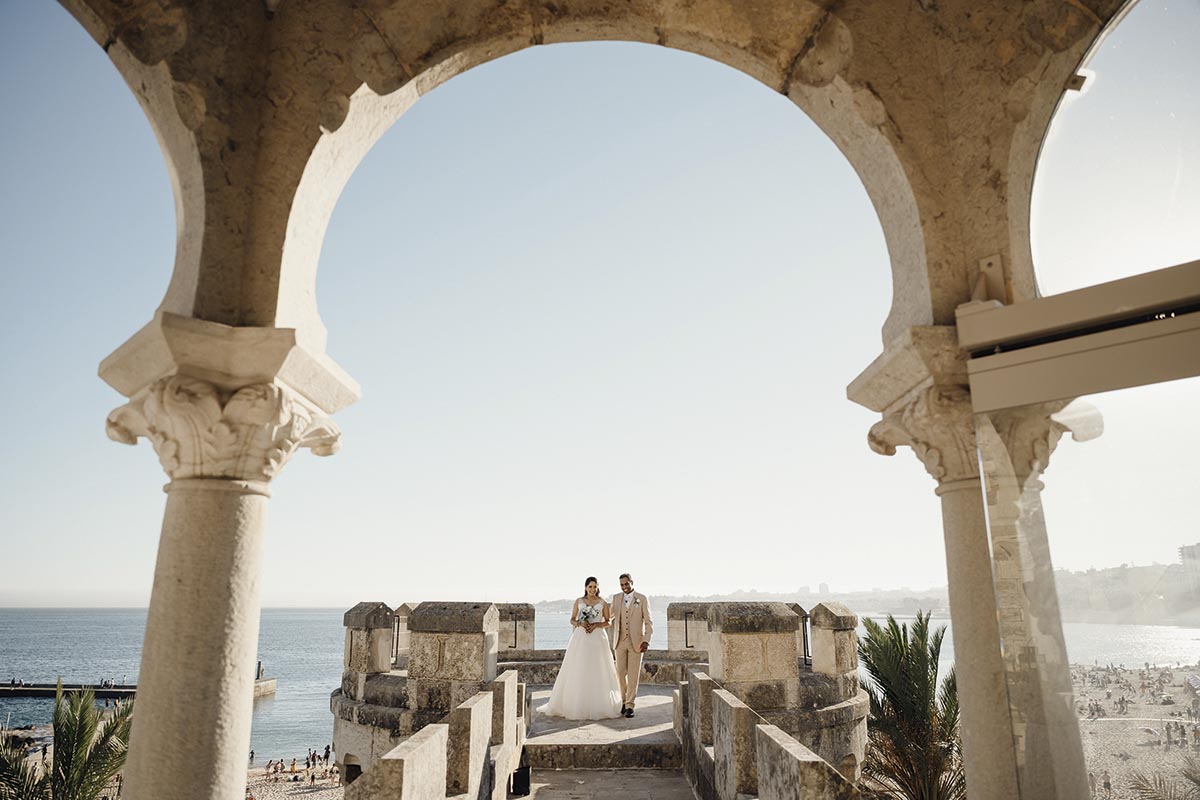 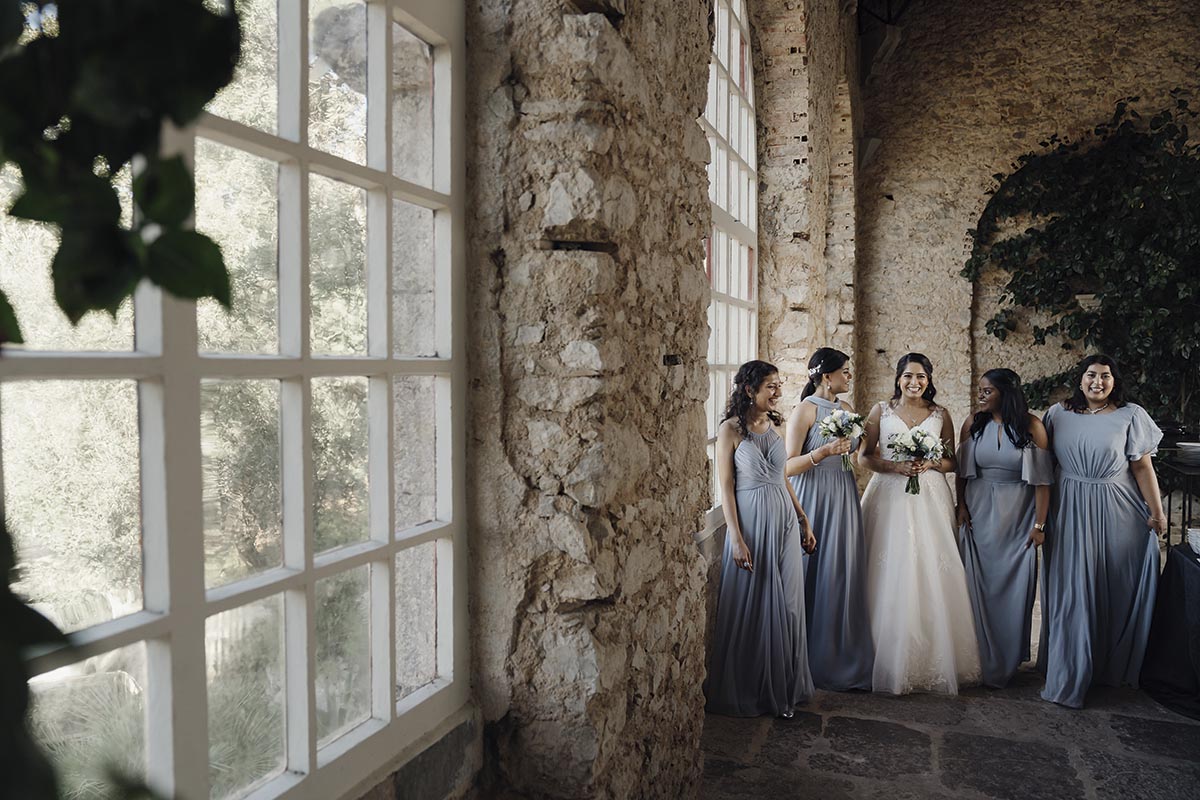 Karishma and Ravi combined elements of their Portugese location with their Hindu heritage. For their civil registry the colour palette was white and blue based on the traditional Azulejo tiles from the region and the bridesmaids wore pale blue dresses which complimented the sea views as the ceremony was held on a fort over-looking the beach.

For their Hindu wedding ceremony the couple opted for an Indian Summer Garden theme in the picturesque grounds of the Penha Longa Resort which was once used as a meditation site for monks living in the nearby monastery. Karishma reminisces: “Our mandap was across a pool of sparkling turquoise water and the sound of the pool being filled with a steady stream of water filled the garden with a soothing noise alongside the sound of a meditative Bansuri being played during the wedding ceremony; it felt like a dream.” 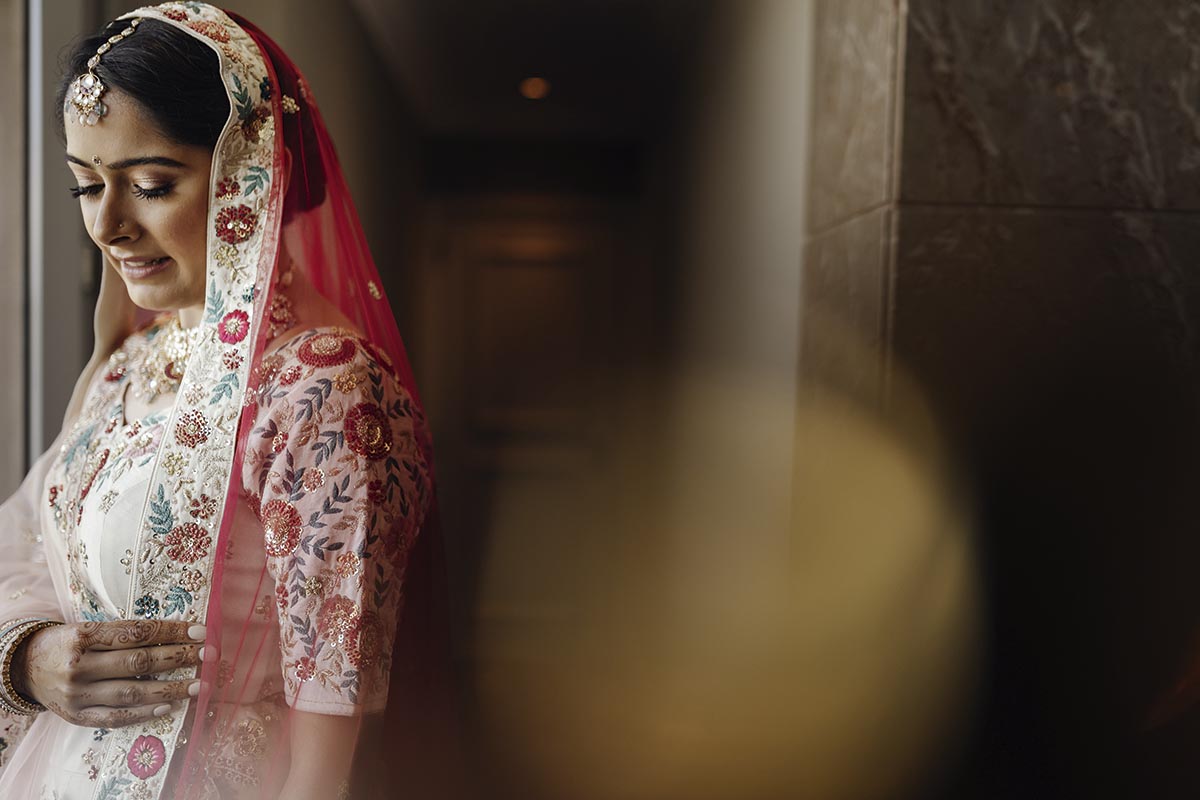 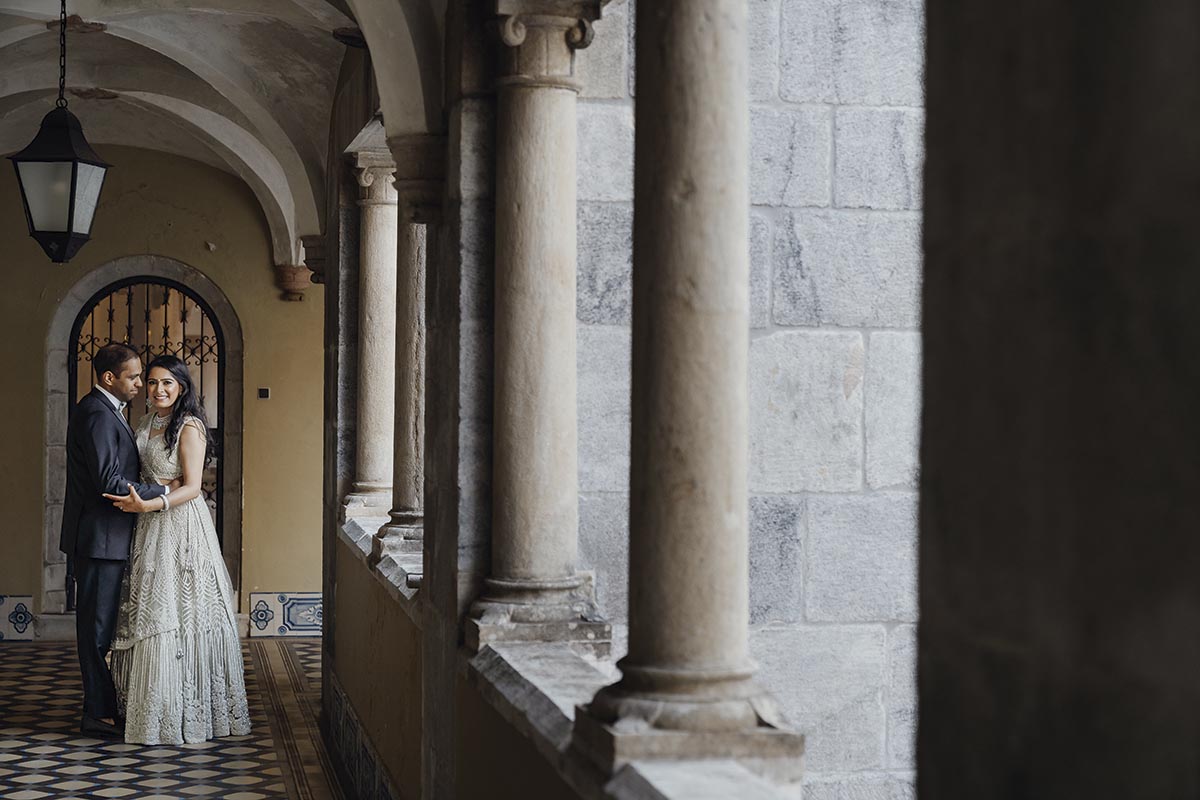 Over their three days of festivities, the couple held six events: civil wedding, Ganesh pooja/mandvo, pithi, mehndhi party, Hindu wedding and reception, giving them the opportunity to wear different outfits. The couple did their shopping in the UK but when it came to the Hindu wedding both outfits were designed from Karishma’s vision of a floral lengha with pops of hot pink and a sherwani for Ravi with complementing design and a matching dupatta. 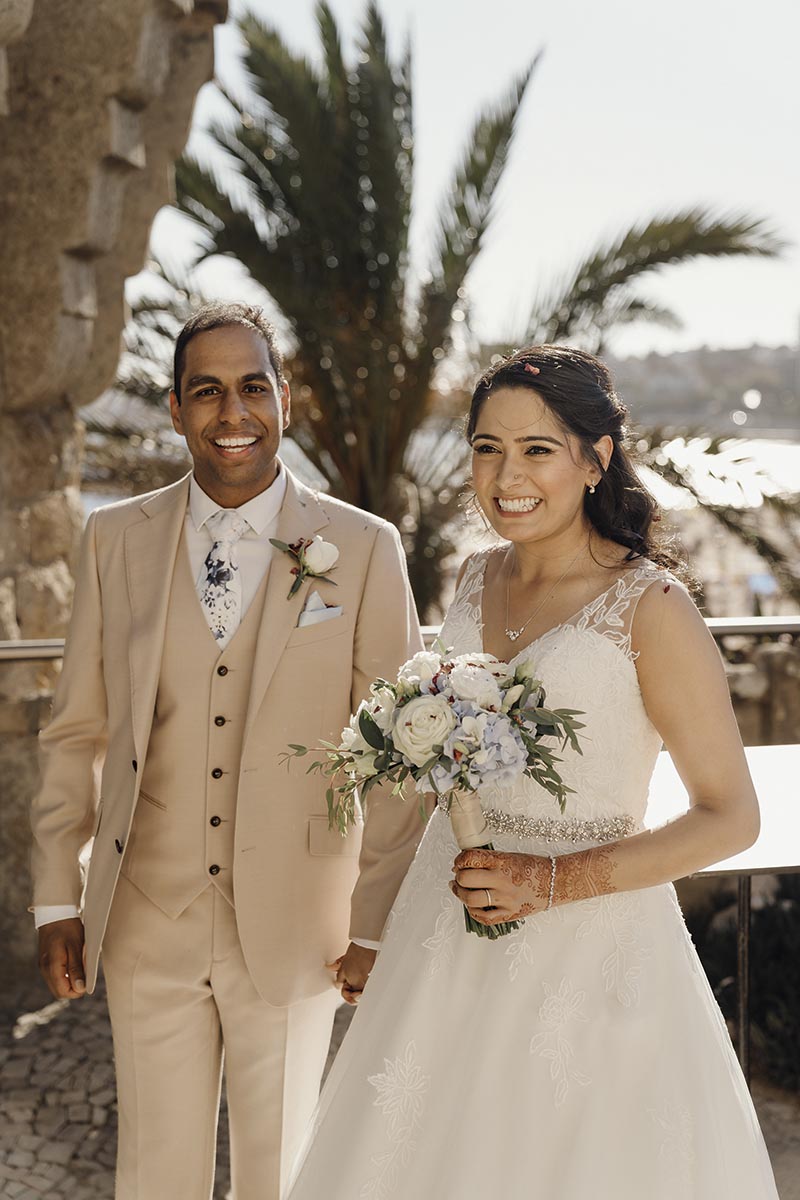 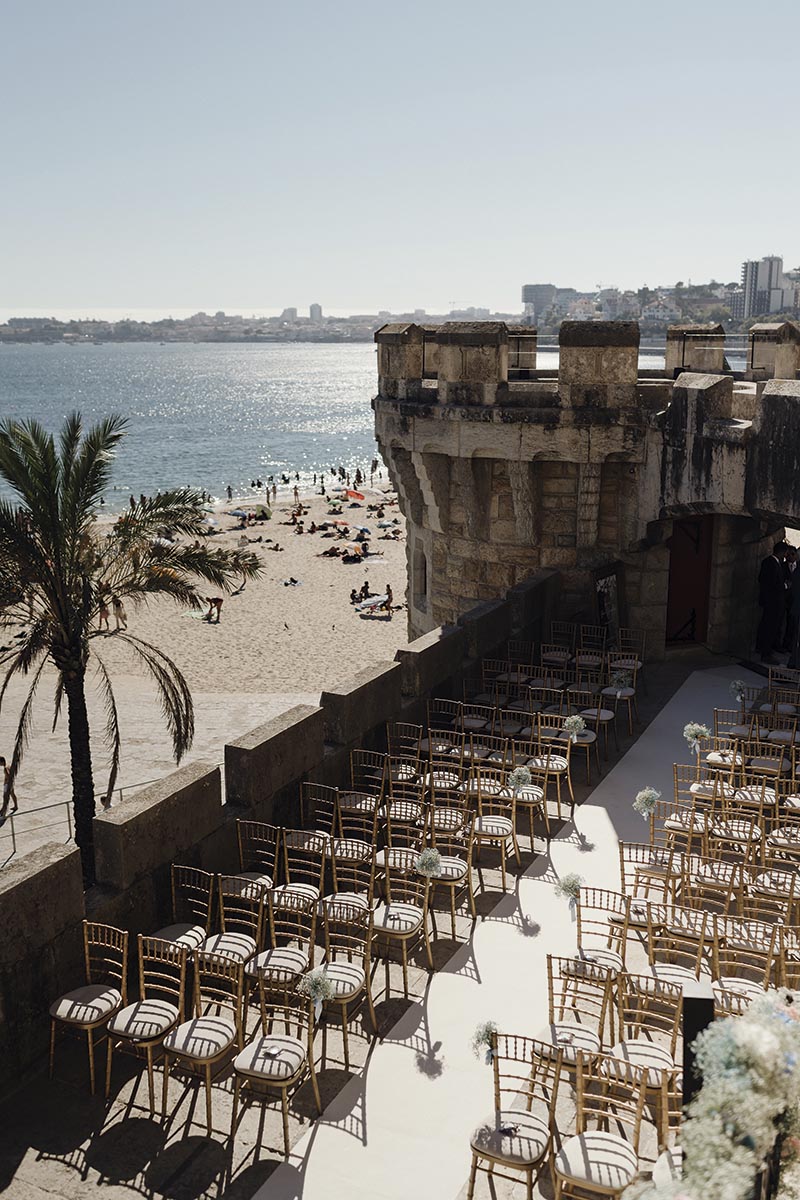 The celebrations took place during the week with their civil ceremony first; it was no ordinary Monday! Guests were transported to the beach where they were greeted by the sounds of a Bollywood string quartet. The beach setting allowed the couple to get stunning portrait shots, making the most of golden hour and sunset. This was followed by a magical moment where guests created a twinkling archway of sparklers that the couple walked through to cut the cake.

That evening the venue was transformed for the sangeet and mehndi party. Guests enjoyed mocktails and canapés and danced to classic Bollywood songs. Keeping with the filmi spirit Karishma’s sister Roshni and the bridesmaids performed a Bollywood dance routine straight from the pages of a Karan Johar hit. Games, a disco and traditional Gujarati garba dancing was a fun end to the evening.

On the final day the Baarat started with Ravi entering on a golf buggy to the sounds of dholis and a saxophone as smoke bombs released a rainbow of colours. Karishma entered to the sounds of a live flute.

The celebrations culminated in a grand cocktail reception with food, speeches and the couple’s First Dance as husband and wife. Karishma sums up: “Looking back at the photos, the whole wedding feels like a dream. Three days went by in a flash but these were some of the happiest moments of our life. Seeing our family and friends smiling and enjoying themselves in the photo means the whole world to us.” 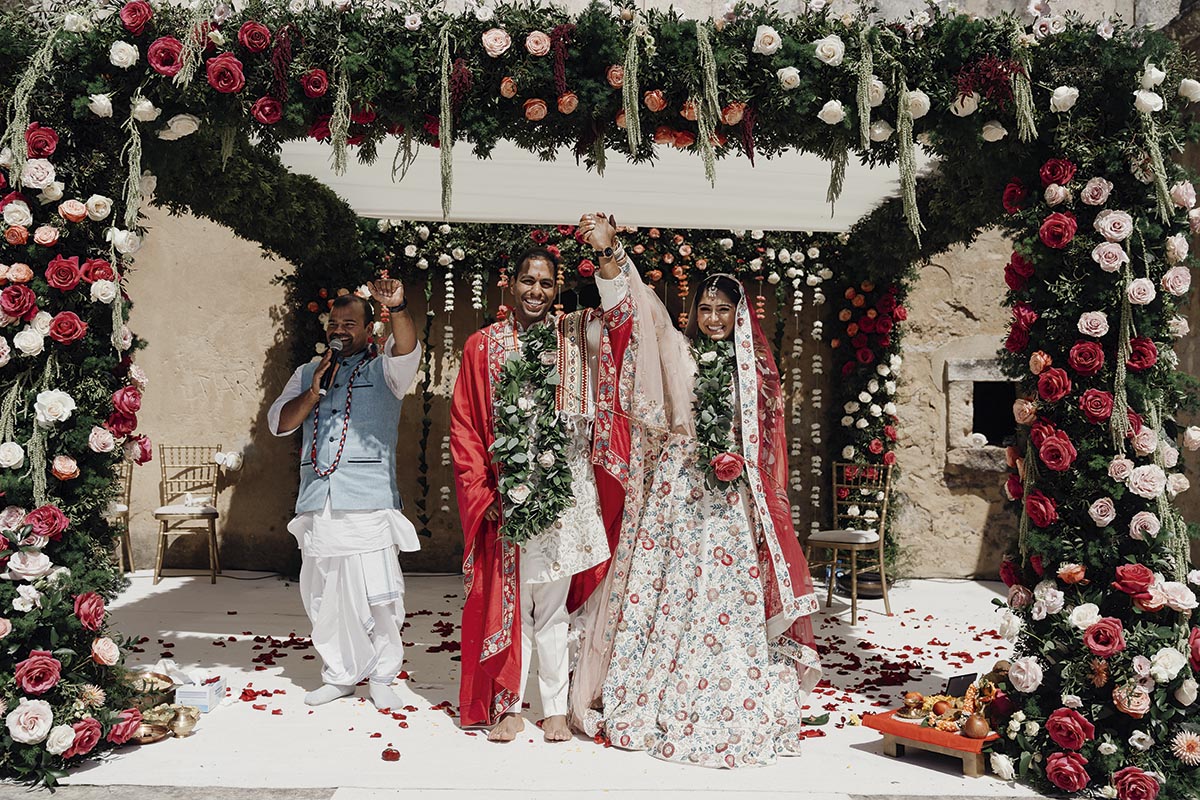 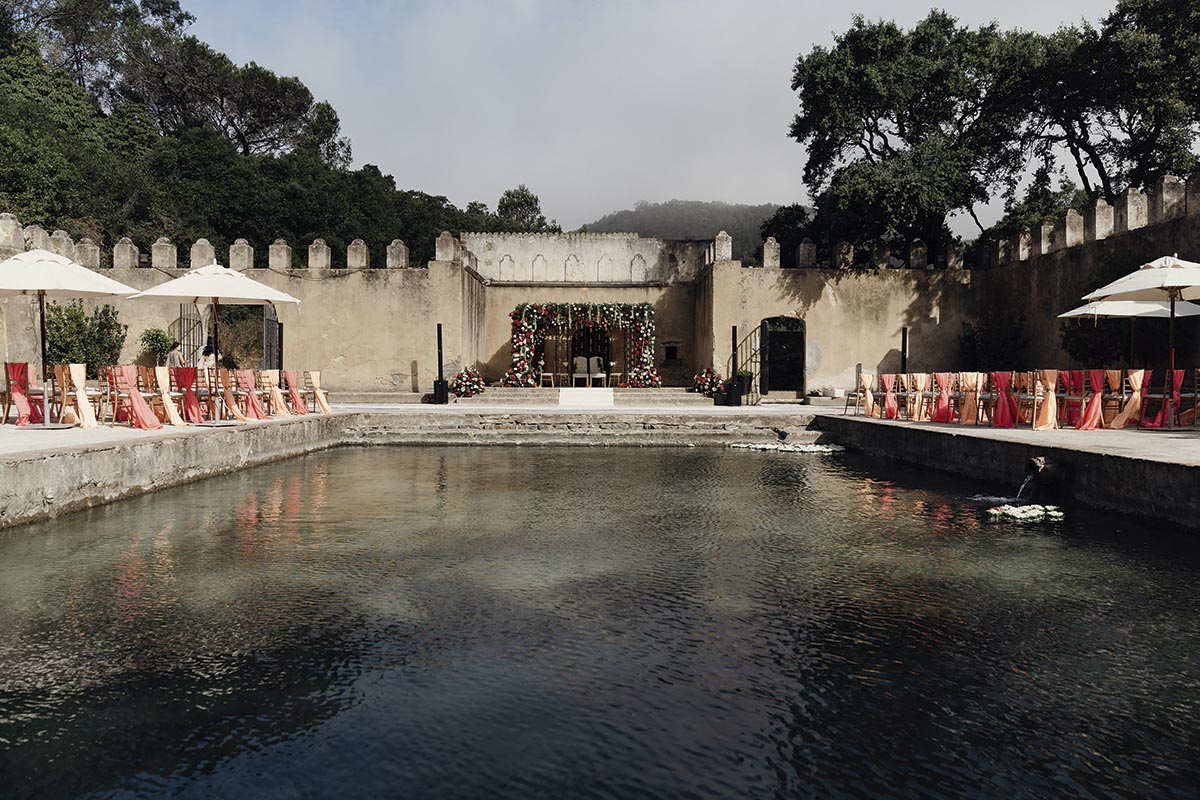 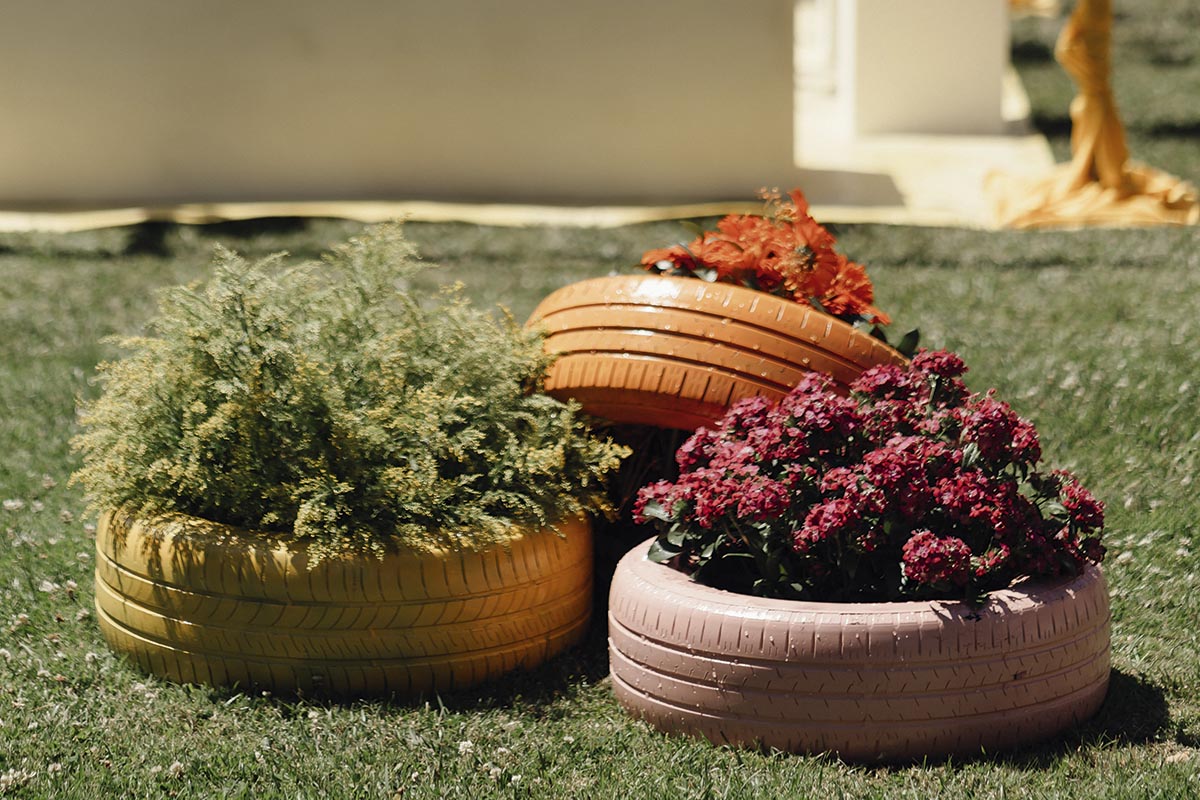 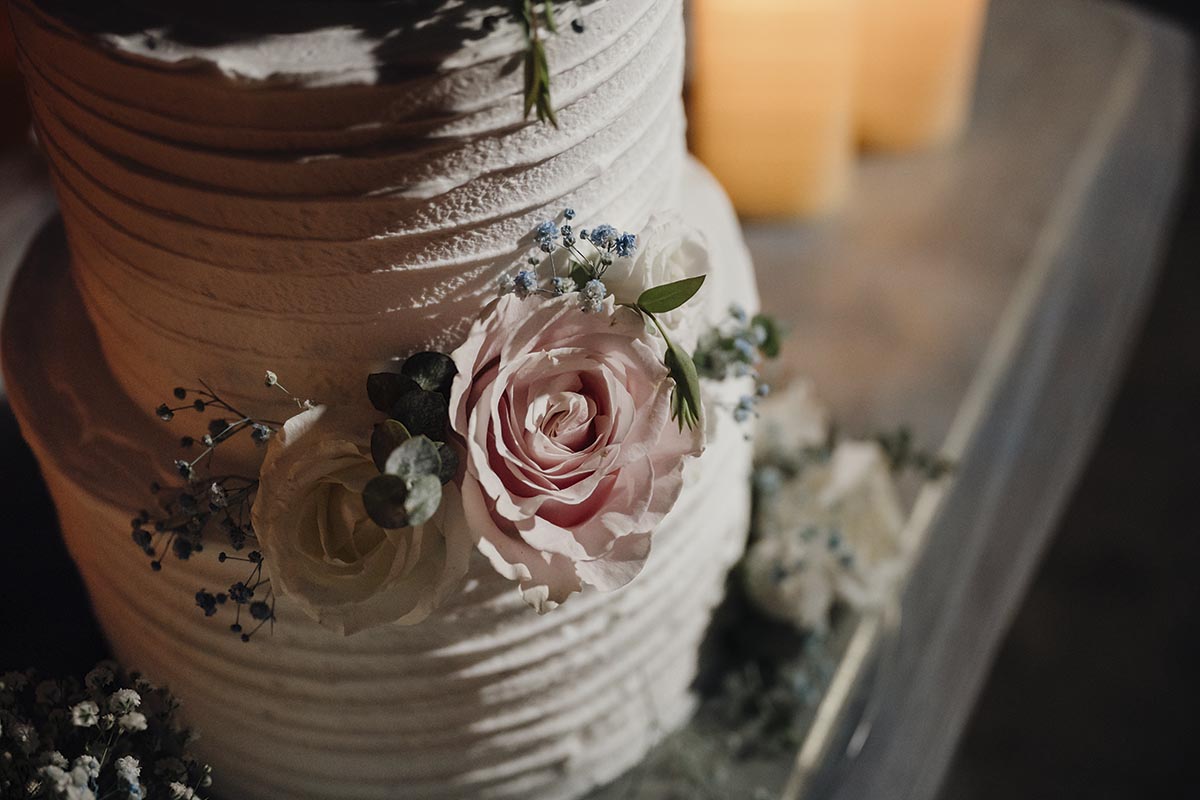 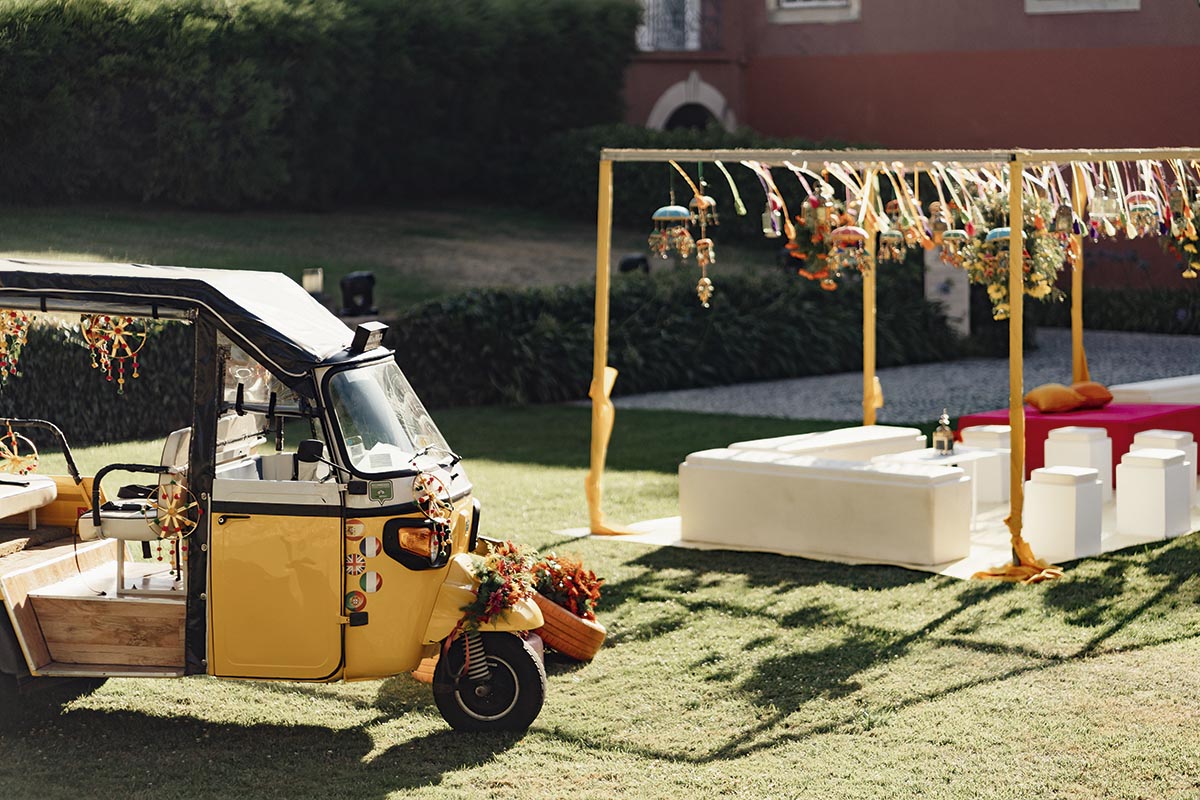 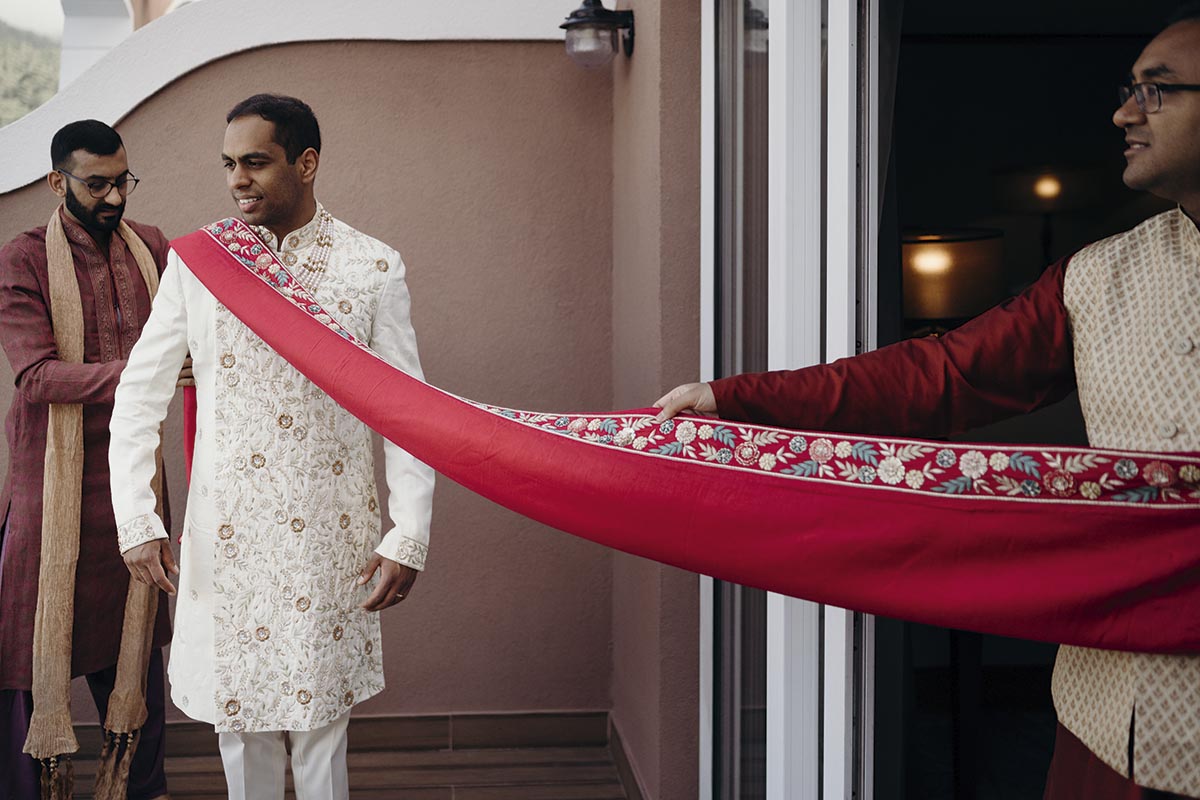